The story of the Reservoir’s nesting bald eagles began in the fall of 1997. Bald eagles are usually spotted gliding over our hawk watch during the fall. They are occasionally joined by golden eagles also passing through on their migratory journey.

What was different about this pair of adult bald eagles was that they decided to hang around. Instead of using Merrill Creek as a pit stop to rest and refuel on some fish or waterfowl, they settled in. During the spring and summer of 1998, our optimism grew that they may indeed nest. Along the western shore of the reservoir, the eagles constructed three crude “house-keeping” nests. A biologist from the New Jersey Endangered and Non-game Species Program explained that these practice nests were almost always observed the year before a pair of bald eagles mate and establishes a real nest.

In the winter of 1999, continued observation of the eagles revealed that Merrill Creek would become only the second nesting location for bald eagles in the Northern half of the state!

In 2010 Merrill Creek Reservoir, the New Jersey Department of Environmental Protection (NJDEP), Department of Fish and Wildlife, Endangered and Non-Game Species Program, and the Conserve Wildlife Foundation collaborated on an exciting new project for the states’ endangered bald eagles.

The Merrill Creek Owners Group (MCOG) donated the funds needed to purchase the equipment for the eagle monitoring project. Originally the funds were to be used to establish an eagle cam that would provide a birds eye view of the activity in an eagle nest located at the reservoir. Unfortunately, the remote location of the nest at MCR presented insurmountable problems that prevented a cam from being installed. The MCR staff suggested that the funds instead be utilized to purchase (2) satellite transmitters.

On June 13, 2011 NJDEP biologists, staff from Merrill Creek Reservoir (MCR) ventured across the reservoir to band the 8 week old bald eagle chicks that were nesting on the edge of the lake. This was the 8th time that biologist have banded young eagles from Merrill Creek nests, but it was the first time that they affixed a satellite transmitter to each of the birds. In fact this was the first time that the NJDEP biologist had ever used a satellite transmitter on bald eagles. The state has used traditional transmitters on eagle fledglings that were hacked (introduced) in the lower Delaware River area from 1983-1989, but this will be the first opportunity to conduct a long-term research project with eagles in NJ.  The transmitters will allow the birds to be monitored for up to three years as they move away from the nest and begin to establish their own territories.

The two MCR eagle chicks, one male and one female, were fitted with transmitters, held on their back by a harness made of Teflon ribbon. The transmitters will allow the birds to be monitored for up to three years as they move away from the nest and begin to establish their own territories. Merrill Creek staff will receive the data gathered by the satellites and will then manipulate it to make it useable for other researchers. This critical data will allow biologists to better manage this most magnificent bird that whose population was once on the brink of collapse in our region.

Several GPS locations are collected for each bird on a daily basis. This data that is being collected will be useful in a variety of projects such as:
• Migration patterns
• Night roosting habits
• Impacts of land type and weather to migration and roosting

To access the data that has been collected from the eagles, select from one of the following links below. MCR updates the data on a regular basis, so please check back often.

“Harmony 1” was a female banded in 2011 and traveled out to eastern Long Island before returning to Merrill Creek Reservoir.

The eagle was observed perched on a downed tree alongside of one of the hiking trails within the Merrill Creek Environmental Preserve in October of 2011.

Merrill Creek Reservoir staff, assisted by a volunteer, were able to carefully capture the weakened eagle and transport her to the Raptor Trust in Millington NJ. Veterinarians at the Raptor Trust administered care overnight but unfortunately the eagle died the next morning.

Dr. Erica Miller, with Tri-State Bird Rescue, performed a necropsy on the young eagle and determined that she died of starvation. The bird also tested positive for the West Nile Virus which may have compromised the bird’s immune system and possibly contributed to the birds ultimate demise.

On May 29, 2012 the largest of the three chicks hatched that year was fitted with the transmitter that was originally used on “Harmony” in 2011.

The male eagle that was banded in June of 2011 was found dead on January 18, 2013. The bird’s left wing was severely broken and most likely died as a result from this injury. The bird was located in a small patch of woods along Rt 78 in Clinton, NJ and was most likely hit by a vehicle.

Harmony 2 was banded ion May 29, 2012 and has been traveling between the Chesapeake bay near Baltimore during the winter months and then heads north into New England fro the summer. She has spend most of her time along the Housantonic and Connecticut Rivers.

“Haliae” was one of three eagles from the nest that were banded on May 31, 2013. Because she was the largest of the nestlings, she was selected to be fitted with a transmitter. This transmitter is different than ones previously deployed in that it uses GSM technology. Rather than using satellites to pick up the bird’s location, the transmitter will transmit data via cell phone towers. The data is then transmitted over the internet and delivered as an email to a mobile device or computer. This new technology transmits more data, is less expensive and allows users to have instant access to the data through smart phones or computers. The data can be viewed via a link to “Movebank”, an organization that has created a repository for online data from wildlife tracking projects throughout the world.

Beginning on September 22, 2018 through October 23, 2018, Haliae’s transmitter began transmitting a signal from the same location in Whiteford, Maryland. Volunteers were able to locate the transmitter on the ground and discovered that it had a broken harness. There was no sign of Haliae in the area so it is believed that she is still alive, but unfortunately we have lost the ability to track her movements. This is especially unfortunate as she is now an adult and would possibly begin breeding in 2018/2019.

Have you seen Eagle Activity? Please share it with us!

Please remember that these birds are very sensitive to human disturbance! Do not attempt to walk or boat within 300 yards of the eagle nesting area. The best observation point is from the Inlet/Outlet Tower parking lot. To reach this area, park at the parking lot off of Fox Farm Road. 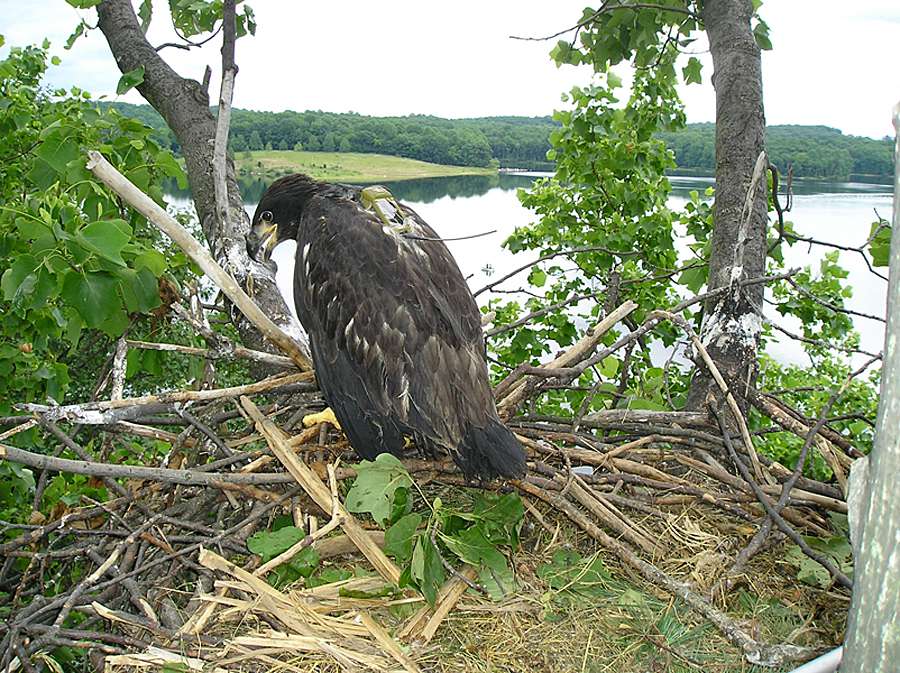