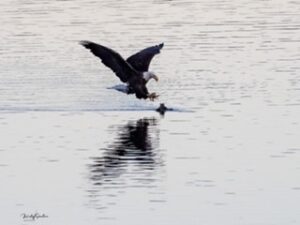 Thank you to all the wonderful people who form the Scott’s Mountain Hawk Watch.

Despite having to deal with thousands of lantern flies, our watchers reported another successful Hawk Watch season with a total of 8858 birds spotted throughout the 3 months. Although the Broad Wing numbers were down with a total of only 4893 birds counted, October and November brought record number of Red-Shoulder (394) and Golden Eagle (28) sightings. Our watchers also reported sightings of a total of 1579 Sharp-Shinned Hawks. Some highlights from the watch include: 16 Ravens in a Notch, a Rose Breasted Grosbeak, Purple Finch, a Kingfisher, a pair of Yellowbilled Cukoos, a Blue headed Vireo, a Black Throated Green Warbler, 3 Northern Parula, Juncos and Yellow Rumps, thousands of Canadian Geese, and large kettles of Vultures. Seven Peregrines were spotted on October 4, 100 Pine Siskins on October 15, and 2 Gray Ghosts were spotted on November 4.  The first Snow Bunting of the season was spotted on November 3. November 16  brought our spotters the first Rough Legged Hawk in many years.